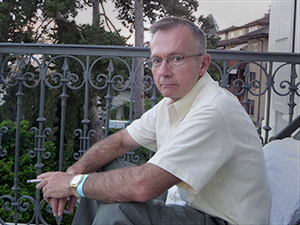 Donald Ray Pollock is an American writer. Born in 1954 and raised in Knockemstiff, Ohio.

Pollock has lived his entire adult life in Chillicothe, Ohio, where he worked at the Mead Paper Mill as a laborer and truck driver until age 50, when he enrolled in the English program at Ohio State University.

While there, Doubleday published his debut short story collection, Knockemstiff, and the New York Times regularly posted his election dispatches from southern Ohio throughout the 2008 campaign.

The Devil All the Time, his first novel, was published in 2011.

His newest book, a novel called The Heavenly Table, will be published by Doubleday in July, 2016.

“Good things come to those who wait. Most of my favorite writers take their time. It can be years between books but if you really love an author’s work it is usually worth it. Donald Ray Pollock has just published his third book, “The Heavenly Table.” This book was worth the wait.”